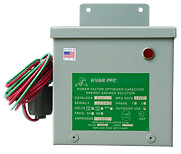 I am extremely satisfied with the results from your KVAR energy saver. I appreciate your concern with how the units have been working and monitoring its working ability.

Our electric consumption speaks for itself. We have been saving 15% on our three main A/C units which are five tons each. During the spring, summer and fall these units run 12 to 18 hours a day. On our pool pumps (4 at one horsepower each) we are saving 10% in electricity. That 10% saving occurs 24 hours a day.

In addition it’s comforting to have surge protection on these expensive compressors and motors.

Thank you for introducing us to your product and I would recommend this device to anyone concerned with saving money on their electric bill.

I just wanted to thank you for introducing me to the KVAR box. The neighborhood  I live in is all electric so my electricity bill is outrageous. I was really excited to try the KVAR box not only to lower my monthly electric bill but as a first step in going “green”. After the quick and simple installation I anxiously awaited the next months bill. I was so pleased to find that my bill had gone down substantially, from $406 to $238. I am excited to see my next bill! I would recommend this product to everyone, not only is it good for your pocket book it’s good for the planet!

Centex Homes (Southeast Florida Division) has recently installed the KVAR energy saving device (inductive equipment energy saving unit) on our Emerald Bay Model at our premier community in Wellington, Florida. Our decision to install the KVAR unit was based on a need to reduce power consumption at our model.

I was present at the installation which took a total of fifteen (15) minutes. Although not required, our electrical contractor installed the KVAR unit. We conducted a timed test of the revolutions of the FP&L electric meter and found, after a few mathematical calculations, that a reduction in power consumption was at six (6) percent. This is a significant savings when you consider that our model air conditioners run twenty four (24) hours a day, seven (7) days a week at a lower cooling temperature than a typical residential housing.

At present, we are sizing a unit to be installed at our Corporate Headquarters in West Palm Beach, Florida and we will be installing additional KVAR units in our remaining models throughout Martin, Palm Beach, Broward and Dade Counties. Savings of a minimum of six (6) percent per model at over twenty five (25) models does represent a cost saving opportunity to Centex Homes.

The power consumption in my home has been drastically reduced since installing the KVAR unit. My last three bills were down from an average of $130 per month to $93, $73,and $77 for FEB 08 MAR 08 and APRIL 08 and is currently on schedule for about $77 for the current month half way thru the month of May. I installed the unit in Feb 08. My home is over 30 years old and has a three year old A/C compressor and a 7 year old heating unit. I have several neighbors who have decided to put one on their house after hearing my results. I am anxious to see what savings they will get also!

My daughter and I have two homes for the elderly which were built only two years apart. Although they are approximately the same square footage the electricity cost was approximately $450 or more per month in our newer home. I tried to get Wisconsin Public Service to do an audit, but they refused. When we were presented with the KVAR option, I felt we had nothing to lose. Since the unit was installed, we saved more than the cost of the unit in the first few months. We felt the savings to be substantial enough to install another unit in our first home and see what our savings will be.

I had the KVAR system installed at my 2500 sq. ft. residence in Yucca Valley, CA in mid-August of 2007. My first bill after installation was over $100 less than the previous bill. The next bill was the first one that was entirely on the KVAR system, versus the same billing period last year, I used 29.69% less units of energy. That’s a lot of savings! With the economy being the way it is this year, the KVAR system may be the best financial decision I’ve made all year.

When my KVAR unit was installed, our electrician metered the amps being purchased both before and after the installation. I was totally blown away by the drop in amps with the KVAR unit. Sense thn, we have consistently been able to track about a 23% to 25% decrease in our electric bills compared to the same months in the previous year.

Thanks for the savings!

Here's how it works